I’ve recently been playing around with creating my own GPSDO based upon an Arduino and Si5351a synthesiser and needed away to check the accuracy and all had to hand was a rather old Racal 9001 6 digit counter which wasn’t cutting the mustard.

A friend of mine recommended a BG7TBL FA-2 with a precision of 11 digits/second at 10MHz which can be bought from eBay for around £100 pounds including postage which is a lot cheaper than buying an older Racal 1998 10 digit counter which go for silly money. 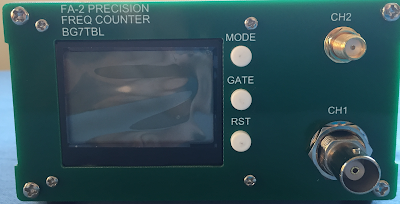 In the above picture of the front panel you can see its very simplistic consisting of three push and the two channel sockets.

The mode button lets you switch between channels and whether or not to display averaging.  Gate allows to you to select one of the three gate options.  RST allows you to reset the averaging when displayed.

Some buttons operate in tandem with another to select additional options such as RST+GATE to turn the LPF on and off, RST+MODE switch between input impedances on CH1.

The rear panel has the 10MHz reference input and outputs, USB interface, DC power socket an on / off switch and access to an internal trimmer to adjust the internal OCXO. 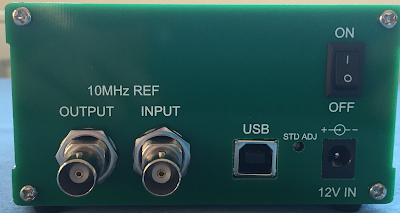 To test the unit I used a LeoBodnar single output GPSDO locked to six satellites with a SNR greater than 40dB and set to 10MHz at -3dBm.

I wrote a piece of Python code to log the data from the USB serial interface and saved the data to CSV which I then processed again using Python and the matplotlib graphing library you can grab the code from https://github.com/M0WGF/RadioOddsAndSods

Both the FA-2 and GPSDO were kept at a fairly constant temperature of 18 degrees C for three hours before the test began.

On the FA-2 channel one was selected with the input set an impedance of 50 ohms, the LPF switched off and a 1/s gate time.

With the GPSDO connected and locked I switched the FA-2 on and started logging and to be honest went off for a cuppa thinking it would take awhile to stabilise and as you can see from the following chart that wasn’t at all the case.

You can see in the first five minutes there’s a rapid decrease before dipping below and returning to 10MHz as the OCXO heats up.  The first data point being taken at 16:37.

Below we zoom in just before the frequency dip.

As you can see the measured frequency at this scale is near as dammit spot on within thirteen minutes of switching the unit.

Next lets zoom in further and see how the stability looks in much finer detail.

As you can see the readings from the FA-2 are well within the +/- 0.01Hz measurement we were expecting from the Bodnar GPSDO.

I would have liked to be able to check the accuracy in the GHz range but sadly I don’t possess an accurate signal source at those frequencies.

All in all I think for £100 unit from eBay it’s performance is excellent so if you’re in need of a cheap frequency counter the FA-2 seems to be a bit of a bargain.